For a little while in high school, enamoured by the Ridley Scott and James Cameron directed films (Alien and Aliens, respectively), I was drawing those face-hugging, chest-bursting, acid-blooded, resin-secreting xenomorphs, every chance I got!

Today is #AlienDay, April 26, a nod to the moon named LV-426 (from the first two films in the horror and sci-fi film franchise)  – and so we celebrate all things Alien.

With pencil and coloured pencil, with pen and coloured marker: here are six Alien drawings that I recently found, drawn over a three month span of time, and once lost in a pile of old high school drawings from way back in 1989 – twenty-eight years ago!

Twenty-eight years ago?! Holy hell! Nuke that site from orbit! 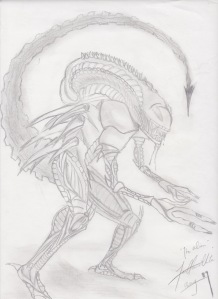 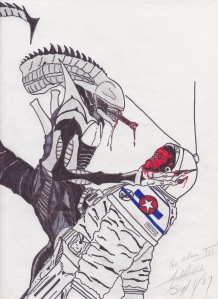