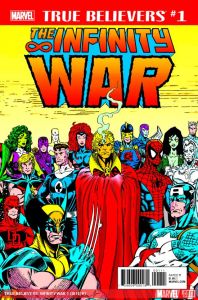 10 years in the making! That’s what brings us to this weekend’s release of the much-anticipated Avengers: Infinity War, the nineteenth entry in the unprecedented “It’s All Connected” film franchise! But it all started in the comic books with Marvel Comics’ 1992 Infinity War six-issue miniseries publication, written by Jim Starlin and illustrated by Ron Lim. Today, then, is a nod to those originating times with the inexpensive, practically free, $1.00 republishing of “True Believers: Infinity War #1″! A great primer for all lovers of the Marvel Cinematic Universe film franchise!

You can read the column in its’ entirety here.