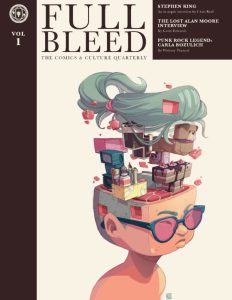 When I first started reading comic books during the early 1980’s, I dove head first into the medium and then the artistic culture.

From those poly-bagged Marvel Comics and DC Comics two-for-one deals found on the local department store magazine rack, I deftly moved to the direct-market comic book store and all they had to offer.

It was there that I came across periodicals that featured sample chapters, biographies, focus articles and interviews with some of the writers and artists that I was just discovering – and growing to love. More than just monthly Batman comics, I was reading and adoring issues of The Comics Reader (1961-1984), Epic Illustrated (1980-1986) and The Comics Journal (1977-and still going, albeit online), full of tales of writers and artists and their influences, their work, and their craft.

Those sorts of industry and artistry periodicals have gone the way of most print zines, unfortunately…